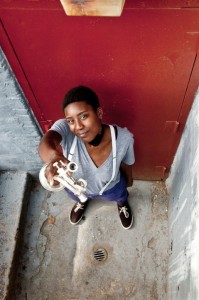 I’ve got some new music for you to take a listen to. Fair warning…it’s a little different from what you normally hear here, but that’s what’s cool.

So here are the deets:
Trumpet Grrrl first started playing the trumpet at age 10. Her bio says, “Despite a lack of natural talent on the instrument, she practiced hard and joined many youth music programs” which cracked me up. I love a gal who won’t give up. Usually this means that the result isn’t going to be very good, but hang on:

“As a result she, performed with the National Symphony Orchestra, played at Carnegie Hall and met many well renowned classical musicians.”

So in 2010 she started recording this project, The Basement Tracks made in, of course, her basement studio. She wrote all the songs and produced them all herself (with the exception of the track, Amaryllis, whose beats were done by PT Burnem).

It’s a little off the beaten track, but really pretty cool! Trumpet Grrrl is based in Burtonsville, MD.

[give Basement Tracks a listen]
or [check out her site]

← Some great cheap albums
Album Review: Map of the World by Kathleen Sabo →