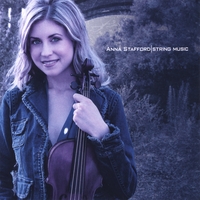 This is a nice instrumental album. If you like strings. And luckily I do. However, it’s a bit samey and I would like to have heard some other instruments in there as well. But as a showcase to Stafford’s talent, this is right on.

There are some really intense moments such as on Green Walls. Where it almost sounds rock-ish. It especially would if there were a full orchestra playing. It really sounds more to me like a demo of her work. Which is fine, but for a record to really be fleshed out, I think it should have more. But perhaps that’s just me.

I am not educated in classical or string music but I will say it’s lovely.