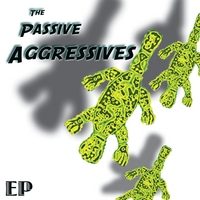 Being a Minnesotan born and bred I just had to give The Passive Aggressives a listen based on their name alone.

I will say it’s quite a switch from what I normally listen to or what is normally submitted for this site. Sometimes this can be a good thing. I am still undecided as to if this is or not.

My first thoughts were: Quite hard, punky. Driving rock style guitars that scream, the singing is sometimes in unison (which I do not like) in a nutshell, Messy.

But over time it’s growing on me. Maybe my ears just weren’t primed yet. Or maybe I just don’t care for the first track.

There’s something fun and playful about them. Any band with a song about evil clowns has got to be fun right?

Erin (lead vocals) has a voice that matches the material nicely. It’s got the right amount of strength to it so as not to overpower the music (though, that would be hard to do) but also enough of an edge to hold up to it.

It’s not really something I would listen to on a regular basis, but they’re good and if you like this genre you’ll like it too I think.

[The Passive Aggressives on MySpace]