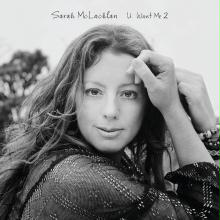 U Want Me 2 the first original track since Sarah’s 2003 release, Afterglow.

It is one of two brand new tracks originally composed and produced by Sarah included in new release Closer: The Best Of Sarah McLachlan, slated for an October 7th worldwide release.

Ed Note: what’s with the title? Is she Prince now? Still looking forward to it!!!