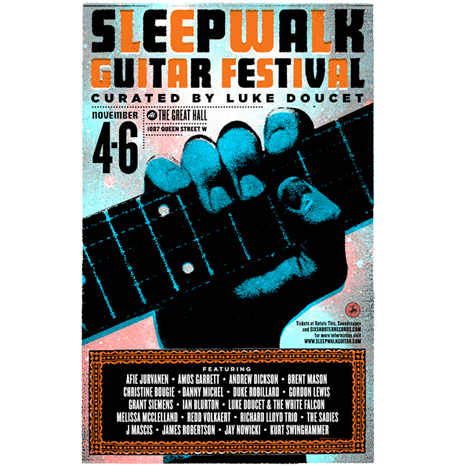 Six Shooter Records is proud to present the inaugural Sleepwalk Guitar Festival, an education and celebration of all things guitar. Curated by Luke Doucet, Sleepwalk Guitar Festival brings together trailblazers and standard-bearers of excellence from across genres and across North America. Sleepwalk’s namesake is the instantly familiar (and Billboard chart topper) instrumental composed by Santo and Johnny Farina. See the original and still definitive version performed by the brothers [here].

Sleepwalk will present an Emerging Guitarist Award to a young musician who demonstrates innovation, artistry and technique. The prize will be $1000, awarded based on the submission of a youtube performance video via the Sleepwalk Facebook http://facebook.com/sleepwalkguitar. The contest is open to anyone under 19 years old. Entrants need not submit an original piece of music – an original interpretation is also acceptable.

Luke Doucet is a renowned guitarist who has evolved from sideman to leading slinger. Recognized as one of Canada’s premiere guitarists, Doucet’s reputation has brought praise from both fellow musicians and critics worldwide: “Whenever and wherever Luke Doucet hits the stage, he wrestles every last ounce of Neil Young-battles-Brian Setzer twang out of his gleaming cream-and-gold companion” (Guitar Player Magazine).

Tickets are available at [www.sixshooterrecords.com.].