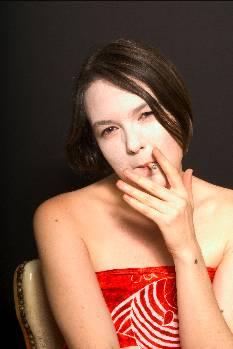 Born in Newfoundland Canada, Jodi began her writing career as a poet. After a short stint as a student in a creative writing program, she left academia for the world of music. Her debut album The Myth of Patience, was selected by Boston’s Metronome Magazine as one of its Top Five Album Picks for July 2001.

Her second record, The Pie-Love Sky, was released in May 2003. Several tracks from this record receive airplay on nationally syndicated radio programs, including Acoustic Cafe, which named her named her as “One to Watch” for the month of August 2003.

Her song “The Forger” was a winner in Rockrgrl Magazine’s “Discoveries 2005” Song Contest and appears on the recently released “Rockrgrl Discoveries 2005” compilation CD. Another song, “In Cabrini-Green,” was selected as one of the few songs that now comes pre-loaded on every new RAVE-MP3 player, and her song “Out of Love” was chosen by JPF Music to appear on Vol.2 of their compilation entitled “Fifteen Minutes.”

Jodi’s distinctive voice is characterized by a certain “delicate toughness” one finds in such artists as Suzanne Vega or Shawn Colvin. Her songs have been called “sophisticated nursery rhymes” and “intellectual lullabies.”

← Spotlight on: Molly Zenobia
Album Review: Everything in Suite ‘D’ by Celeste →