If you can stomach The View…I watched The View when I was out of work simply because there wasn’t much else on (yes, I was always doing something else, but I like to have the TV on, you know, for company) but I could only handle Sherry’s ignorant comments for so long. I’m glad I finally got a job! But if you have TiVo you can record it and just skip to the concert portion!!

In support of the Juno soundtrack, The Moldy Peaches will be performing Anyone Else But You on The View on Monday, January 21, at 11am on ABC. Please check local listings for time and channel identification, and of course, please tune in! 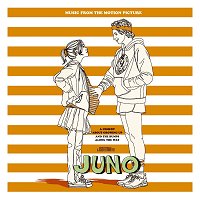 [Hereâ€™s a clip] to whet your whistle in the meantime

The Juno Soundtrack is a 19-track collection that includes eight songs by Kimya Dawson, both as a solo artist and as a member of the groups The Moldy Peaches and Antsy Pants. Two Dawson-penned instrumentals make their debut on the Juno soundtrack, which also boasts songs from Dawson’s 2004 album Knock-Knock Who? and her 2006 release Remember That I Love You. It was the film’s young star, Ellen Page, who suggested Dawson’s music for the movie, and Page duets with costar Michael Cera on a cover of The Moldy Peaches favorite Anyone Else But You (which is heard in its original version as well). Dawson’s other group, Antsy Pants, contributes a pair of tracks to the Juno soundtrack. The eclectic album also includes music by Buddy Holly, Cat Power, Mott The Hoople, The Kinks, Sonic Youth, Belle & Sebastian and Barry Louis Polisar.

Anyone Else But You Streaming Audio:
[Quicktime]
[Real PLayer]

*Amy’s Note: I requested this for review so hopefully I’ll get it soon and will be able to fill you in on all it’s goodness!