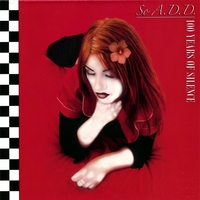 Jol’e Williams makes up So A.D.D and this is her debut album.

She darts impatiently between musical styles and that lives up to the band name.

Dark Night is a whispery lullaby that’s nonetheless on the sinister side. Williams is good at that sort of a thing.

Brown Eyes has a rough, garagey feel and Williams vocal slithers like a snake.

Joseph Arthur’s “When I was running out of time” gets covered in a very nice way.

Jol’e Williams has made an album that’s worth hearing and she’s a talented artist.