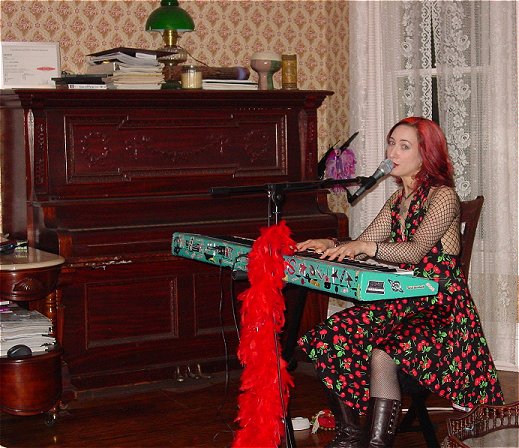 On May 31 we welcomed Rachael Sage back at Collected Sounds. We’ve hosted her several times before and it’s always a great time.

She was recently in London for a sort of a whirlwind trip so I assumed she’d be tired. If she was, she didn’t show it. She put on a fantastic show.

I did not record it this time and did not write down a set list (give me a break! I’m putting food out and taking pictures and trying to keep the dogs quiet and whatnot!) so I’m sorry I cannot tell you what she played. But I know she did mostly stuff from her new record, Chandelier.

She also played at Aura the following day. The turnout wasn’t fabulous but while she was doing sound check a woman happened by the sidewalk (the windows were open), heard Rachael, called her daughters and they all came in for the show. They also gave a generous donation for Rachael. See, all it takes is one Super Fan! This particular one told Rachael that she was like The Jewish Madonna.

Thing about Aura is you often have your drunks. There’s almost always at least one person who treats it like their own personal show where they can yell things at the performer such as, “How much for a cd?!” (though it sounds more like ‘ha mush for a she-dee?!’) and expect the artist to stop singing and answer the question. The drunk this day who was offering her music advice (obviously not knowing that she runs her own record label and has released 8 albums on her own.)

But this one was worth it. Rachael did a great couple of sets, sold some CDs and we all had a great time. 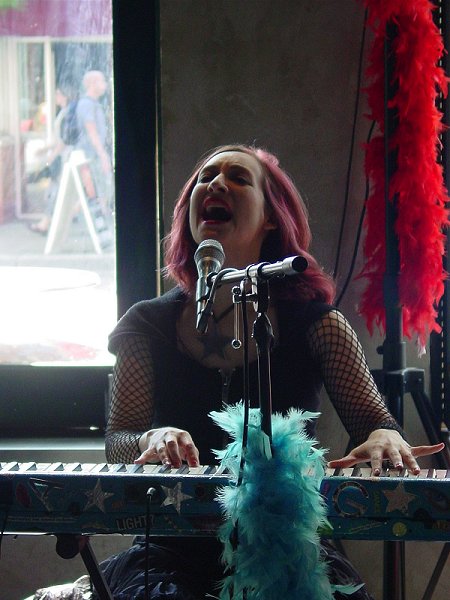