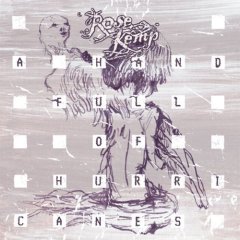 What I wrote down upon first listen is “odd”. Which of course, means when I come across it again I’m intrigued. It is, indeed odd…but a good odd. I’ve probably heard it five or six times now and each time I hear something new I like.

Kemp’s voice is really unique. She can sound soft one minute and like she could kick your ass the next.

The musical style in general it actually reminds me of another little known artist that I reviewed some time ago named Meghan McLaughlin. They both have that grungy, raw, voice-up-front rock sound. It’s quite appealing. She can definitely rock out and at times it even sounds dissonant, but it always sounds cool.

I love the multilayered vocals on Tiny Flower, it’s sort of sung in a round against a pounding drumbeat. Nice effect.

I especially like Metal Bird. It’s got so many movements she could have easily made them into separate songs, but instead she made one really interesting one.

Skin’s Suite is probably the strangest as there are some sounds there that I can’t identify, but it’s also beautiful.

This is not something that’s going to appeal to the pop radio masses…at least I don’t think it would. But those who like edgy alternative rock that’s not too crazy will find this quite nice, I believe.