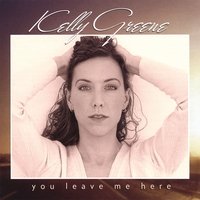 I’ve already spent more time on this CD than I wanted to and as I write this paragraph I’ve only listened to the first song (three times). I listen to most of the records I get on my computer. I have a good stereo system and it sounds great and this is where I write, so it works for me. Which means that CDs that people send in must be playable on my computer. I put this one in and it crashed my WinAmp. I thought that maybe WinAmp was being persnickety so I tried again. It plays the first songs but each time it tries to look up the CD on CDDB it can’t find it. I tell it to ignore/abort and it crashes the program. This happened three times while other CDs worked in between so I know it’s the CD not the program.

So I had to rip the music onto my hard drive and listen that way. Huge pain in the arse. But now I’ve heard the whole thing. OK so onto the music.

Kelly Greene makes no bones about how she wants to be commercially viable. She is going for mass appeal. If that’s what she wants I hope she gets it but that immediately makes me think, she’s going to have to be really good to win me over. I have much more respect for an artist who writes about things that are important to her/him and if others like it, so much the better. But Greene is going for commercial success and that’s evident in the sound.

Don’t Leave Me Alone fades out at the end. I’m not sure why it was so noticeable to me. Either songs don’t do that anymore or they do it better so it’s not so distracting. Maybe the fade was too abrupt, I am not sure.

Take a look at the song titles; do you think this woman is angry or bitter (or both)? I’m guessing this is going to appeal to other women that are angry but that’s not everyone (and it’s not me). These songs are depressing!! Holy cats. It’s all “poor me” or “you left me” or “you don’t know me” in one she even says “I hated you”.

So personal feeling aside…she has a good voice. It’s a bit on the edgier rock side but can sound smooth as well.

I’ve already commented on the lyrics, but the sound is much better. She’s got some really nice melodies. That’s not to say the lyrics are not good, she writes well, I just think the subject matter is overplayed and really really overdone here. I don’t think it serves anyone to have an entire album of angry songs. But they sound good!

As you can tell if you’ve read this far, this is not for me. I am sure there are some people out there to whom it will appeal. I just think if she’s going for mass appeal she should cater to more than angry women.

I think she’s talented, I just wish she’d branch out in themes a little.