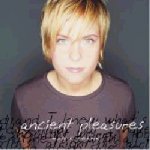 While on a trip to Copenhagen, Denmark I was in search of some Danish pop music by a female artist. As I was sifting through the Danish music bin at a little CD shop a one in particular caught my eye.

The musician’s name is Marie Frank and the CD is “Ancient Pleasures”. Now I know you aren’t supposed to judge a book by its cover, but with CDs you sort of can. Usually the artist wants to cover to reflect the music at least in part. So I snapped it up.

I was not disappointed. She has a nice soft, pop-style voice and she is adorable. She sings in English, plays guitar and at least helped to write most of the 12 songs on the CD.

This is a very nice, pop album. At times she reminds me of Lisa Loeb, other times, Edie Brickell. Strangely enough, after I realized that I went to her web site and saw that her CD was mixed by Bob Clearmountain who had worked with both of those women. Song of her songs, like “Under the Water” have a techno-Bjork-y feel to them.

She now has two songs being used on the soundtrack to the movie, “Love & Sex” starring Job Favreau. The songs used are ‘Save A Little Love’ and ‘Symptom Of My Time’. I think the latter has hit written all over it.

She also has a fabulous web site where you can hear bits of the entire CD and watch a video.