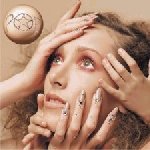 Review by Dan Stark
I’ve been lucky enough to hear an advance copy of the new CD and it is absolutely killer! If Poe had come out with something that sounded like Hello at this point I think I would have found the sound tiresome, so I didn’t have the highest expectations for the new CD, but wow!

You know how all too seldom you put on new album, and the hair on your arms begins to bristle, your adrenaline starts to rush and you want to keep turning it up louder, even though it’s turned up as far as it can go?
Well this is it! It simmers, then explodes, then segues to moody, to melodic and back again. It’s also loaded with atmospheric movie-style sound bites, sound effects and bridges that really tie the whole thing together in true concept album fashion. This one just rocks, and is guaranteed to end up on my favorites list for 2000.

Review by by Eric. AKA RocketsTail
A friend of mine suggested that I listen to Poe because I would probably like her…so the other day I went out and bought the newest “Haunted” and I am in love! The songs on this album are incredible. I find it hard to categorize the feel of this album. I’ve heard parts of Poe’s debut album and I find this album MUCH more inspired and innovative.
She’s no longer just another “angst-ridden female”…these songs have great depth, I am loving it! So this was my discovery for the week. 🙂
~eric

Review by from Jeffrey Hanson-
Wow–I picked this up today and it’s quite a compelling album- very ambitious–sort of like The Beatle’s White Album or something– lots of sampling between songs–but the songs are great! Really rocking but beautiful too. Kind of reminds me of Garbage at times. Really a confident, masterfully produced album.

← Album Review: Stories from The City, Stories From The Sea by PJ Harvey
Album Review: Ancient Pleasures by Marie Frank →