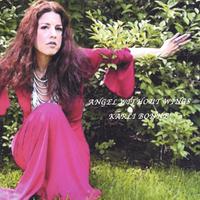 Ok if you know me or have read a lot of my reviews, you may know I am not a fan of Christian music at all. So when this arrived and the one sheet accompanying it read: “Karli Bonne dedicates her music and per passion to the forces that drive her to perform and to live, crafting melodies and lyrics around her spirituality and her love for God.” I thought ‘oh brother…’

Well, this was not what I was expecting. Especially seeing the cover art, I thought it would be all flowery, whispery, ‘praise Jesus-y’ but luckily for me, I was wrong.

It’s more like techno-disco-ambient dance music. Sure the lyrics on some songs may be religious, but if it offends you, don’t pay attention to the lyrics, let the music wash over you.

Once we hit track 4 things take a turn…I can “Psalm 93” as is it more like what I was expecting originally, but it’s still pretty, though her voice goes off-key occasionally.

“Serenade of Love” is another ballad, but much better than the previous song. It sounds like it belongs in a film soundtrack.

“Prison of Fear” gets back to techno.

“Craig’s Song” has a really neat guitar solo that helps makes this a really cool sounding song. It also has a certain film quality to it. IN fact all the songs have a bit of a theatrical feel, I’m not sure if it’s songwriting or production, but it works.

An interesting album all around.