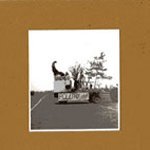 First a note about the packaging…in a word, cool. The case is made of some kind of cardboard with the front cut out to make a frame and a photo inserted. Each CD has a unique photo from previous decades. Mine was of a family with jovial kids but a really surly looking set of parents. Then in where the CD goes was also a negative of another photo (this one was a farmhouse, I think) and a page ripped out of a book called “Antiquities of the Jews” which Google tells me is a history book written by Flavius Josephus.

Anyway, luckily whoever put together the packing is as creative as those behind the music (same?)

Dreamend’s sound is a little like Radiohead at some points, “The Almighty” for one, they really know how to work that crescendo. But mostly it’s pretty unique. Dreamy, ethereal, and lovely. It’s really cool to listen to while looking at Windows Media Player or WinAmp’s visualizations (and no, I’m not high).

Stand out tracks: This is kind of hard because while listening you sort of melt into it and they flow together so you don’t really realize you’re listening to 10 separate songs. But I like the whispery vocals and slide guitar on “Slide Song”. “Ellipsis” has the most melody and stands out a lot to me.

This is a strange and lovely atmospheric CD. If you like moody music check this out.