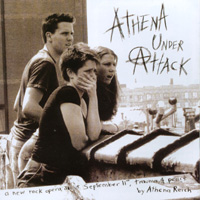 OK you’ve got to be in the right mood for this one.

This is a rock opera. Remember “Tommy”? Like that. Only this is not about a child with disabilities but about September 11th (2001). If you think you can handle that keep reading.

It is a CD full of not so much songs, but vignettes. With spoken lines, “Two planes crashed into the world trade center!” “What?!” “America’s Under attack!” (note: not a good choice is music to listen to at work since you turn it up so you can hear it just in time for her to shout “waaaaaaAAAAAAAKE UP!”)

The musical style is very much like stage musicals. Mostly the voice and sparse piano. In fact I could easily see this on the stage. I understand it was on stage first at the Producer’s Club in June of 2002 then also at the Toronto Fringe Festival in the July of 2003.

These songs are well-written and Athena has a powerful voice that lends itself to this genre. The other actor/singers are good as well.

If you like musicals and can stand another piece of music about September 11th go for it, this is a good one. The anniversary is upon us this might be a good time to give this a listen.