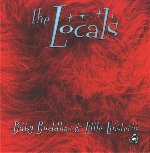 I knew I’d like this band when I saw the CD cover and read the title. I don’t know why, it just seemed whimsical. Any CD with a song called “Tatooed Lady” (even if Tattooed is spelled incorrectly) has got to be good.

Their sound has been called Ani DiFranco meets Dave Matthews Band. It’s not often you hear a violin in a rock band but this really works. Yvonne Doll has a fabulous voice that is perfect for the music. She purrs, she screams, she growls and just plain rocks.

Best tracks for me are: “Thunder & Lightening” which is the title track and gets you ready for what’s to come. “Backyard Stars” is also one of my favorites; it has a slightly Celtic feel.

All told this is a really fun CD and I’m sure I’ll be listening to it long after this review is posted.

Rating: 5 Stars
Comment: What a nice review of this wonderful band.
name: May East . . .Love Poem Songs on Tuesday, August 9, 2005