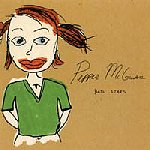 I’ve been a fan of Pepper McGowan for a while now. When I first started this site someone wrote to me and told me about Pepper suggesting I put her on my site. I listened to a few song samples and thought she was great. So up went the spotlight. She even wrote to me and thanked me for it.

So I’ve been familiar with some of her music but this is the first actual CD of hers I have heard.

Pepper says that this CD came about one night after work when she just sat down at her piano and decided to record a bunch of songs alternating originals and covers. While I think all the songs sound great I actually like her originals better than the covers.

“Anything But Apples” is pure Pepper, at least from what I’ve heard. It’s got a great piano part, growly vocals and a sassy style.

I normally don’t care for the song, “Bad Moon Rising” but Pepper breathes new life into it and though it will never be my new favorite song, I like it now.

I just feel inclined to mention the comparison factor. Because everyone who knows Pepper and her music is familiar with it:

People are constantly comparing her to Tori Amos. I have to say that beyond the fact that she’s a woman who plays piano and speaks freely in her lyrics (I can name 10 others that do this too), I don’t see it so much. Their voices are different and so is the style, or maybe I just “hear” Tori differently than everyone else does.

I might go as far as to say if you like Tori Amos you’d probably like Pepper, but don’t expect a clone. Pepper McGowan is an original.

2008 Update: not really though….I would be grateful for any info anyone has on Pepper. We lost touch and her site is down as well as her blog, which I really enjoyed reading. If anyone knows how I can reach her please comment here ro contact me. Thank you!