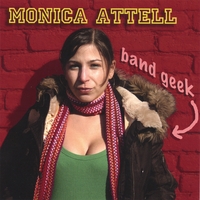 After perusing the Internet I have learned that Monica Attell is an Elementary school music teacher and her website for the kids is adorable. I get the feeling she’s a great teacher. Her style is very accessible and at times borders on theatrical.

Though I think some of her kids may be a little alarmed by some of the lyrics on her solo CD, Band Geek. On track one she sings,

The overall sound is a bit lo-fi which is just fine for these songs; which as I mentioned before, have a theatrical feel (perhaps it’s the flute that makes me think this).

I like Monica’s voice. It’s spot on (ought to be since she teaches music after all) and quite appealing. Listening to her makes you feel like you want to know her personally (but not in a stalker-ish way).

The songs are hooky, often cute, quirky, and charming and I think this is a really fun record.

Stand out songs: Pop Star (I love the lyric, “Make a wish on a pop star…”), Drunk Girl, but they’re all fun songs.

Rating: 5 Stars
Comment: Monica is spot on. She has a very angelic voice. I used to love to hear her in undergrad, and now she is even better. To meet here in person, she hasa warm energy that surrounds and draws you in. Theatrical? Honest and un-compromising.
name: casey on Thursday, August 24, 2006
PS: Amy’s note: “theatrical” is not a bad thing in my world 🙂