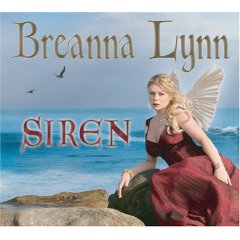 This review is in two parts: The first being what I felt after listening to the record about 4 times when I first got it. Then I set it aside for a few days and picked it up again.

Breanna Lynn, or her people, spared no expense in the packaging of her record, this is clear. It’s a beautifully done tri-fold piece with professional photos and graphic design.

Tucked into one fold is a booklet of more photos and lyrics to the song. However the lyrics are typeset right on top of the photos and are in red rendering them impossible to read. In the other fold is lurking a folded up poster of Breanna.

It’s all quite nicely done (except for the unreadable lyrics). However, whenever I see a record packaged like this I fear that what lies inside is somehow lacking. It’s like they made the wrapping pretty so that you don’t care what the present is.

Breanna’s voice is pretty enough, she hits the notes. But the songs are kind of boring. The melodies are OK but the lyrics are a little lacking. Seem like she took the easy way out at times. That is, wrote exactly what you expect instead of something that would be more interesting or inspiring.

I tend to like music that goes where I don’t expect it. If I listen to the first bar of a melody I don’t want to be able to tell you exactly what will come next and be correct. I want it to surprise me. Same goes with the lyrics.

There’s nothing terribly wrong with this record. I just can’t seem to find anything I really like, personally.

Weeks later: I kept spinning it because I happen to be at time right now where I don’t have a lot of records on my desk. I will admit that it’s growing on me. The songs are catchy enough for me to feel like I know them when mixed in with other music (on shuffle).

I do like Breanna’s voice. It’s pretty without being too girly.

The songs are somewhere between Top 40 and AAA.