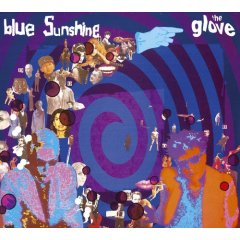 This CD is a re-release by a band that I didn’t even know existed until recently. They’re called The Glove and they are Robert Smith from the Cure and Steven Severin from Siouxie and the Banshees. The record was originally released in 1983 though the union began in 1979.

Apparently this was supposed to be their stab at psychedelia. I guess I fail to see that. But I’m totally willing to take the blame on that point. To me psychedelia is more like XTC’s Dukes of the Stratosphere (which I LOVE). . But this is pretty cool whatever you want to call it.

I first had my husband listen to this because he’s a huge fan of both Siouxie and The Cure. He gave it back to me with a shrug and said, “It sounds like a cross between Cocteau Twins and New Order.” Wha? Well, give him a break; he only listened to the first disc.

I prefer the second disc. That one has Robert Smith vocal demos on it. “Mouth to Mouth” sounds great. Its quite vintage Cure with the echoey haunting vocals and the semi-creepy lyrics such as, “Your body grows more beautiful with every bite I take.”

If you are a Cure or Siouxie fan I do think you should have this. As long as you don’t have to spend a fortune on it. However I will say that the packaging is very nice. It comes with a booklet that tells the story of how these two met (in a bar!) and how they worked together. It’s pretty interesting.

For a collector? A must. For a casual listener/fan? Put it on your Christmas list.