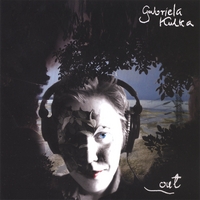 I also have Kulka’s first album Between Miss Scylla and a Hard Place, and I found that one a little less accessible. They’re both odd and quirky, but this one seems more melodic somehow.

I must mention the vocal similarities between Ms Kulka and the goddess that is Kate Bush. Not saying she’s copying her, but you can’t help think of Kate when you hear her (unless you don’t know Kate Bush, but if that’s the case, you have some catching up to do!)

There’s also the Russian element that recalls Regina Spektor. Speaking of Ms Spektor, I’ve been noticing the music loving public has become much more accepting of the odd. I mean that in the best way possible. I adore Regina and am over the moon about her success (I heard her on the radio yesterday!). But I never thought it would happen because she is so very odd.

Well, Gabriella Kulka is odd in a similar way only exponentially so. If you don’t like avant-weird, look elsewhere. I have to admit that quirk-loving me even finds it a little too much at times. But all in all I do like this record and I hope that a lot of people will seek it out and enjoy it.

Rating: 5 Stars
Comment: This is lovely. The lyrics are well crafted, the melodies are interesting. She seems to invoke Kate Bush and Tori Amos on most tracks- but there is also a healthy dose of Laurie Anderson in there at the top and a generous helping of haunting toypop elements. I remember wondering where Kate Bush had gone when Tori Amos appeared… and now onto Gabriella Kulka?
name: Lessa Bouchard on Friday, December 8, 2006