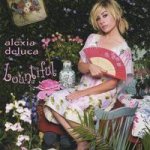 Alexia Deluca has such a lovely voice, husky and light at once. Her well-crafted music is a treat to hear.

“Anywhere But Here” is sublimely sad and jazzy. Deluca sings it with a strong voice despite the theme of a breakup. “My Life” is sweet but still tough. Again, Deluca’s voice astounds. She sounds slightly like Kate Bush, all womanly and wonderfully unhinged.

“The Language of Devotion” turns to Greek myth for inspiration. The story of Persephone who was captured by Hades to become queen of the underworld continues to fascinate. Deluca sings like a siren, while the music is cinematic.

“Like Fire” is folksy musically while the words speak of letting lust take too strong a hold.

“Nobody Could take the place of you” is a moving, soulful song of Deluca’s reunion with her estranged father.

This debut amazes and combines the personal with the universal nicely.