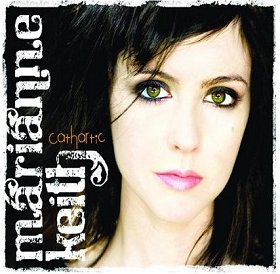 I reviewed Marianne Keith’s [previous release]. She reminded me of Vanessa Carlton. But I thought she was too produced. I thought it was very mainstream and young-sounding, that was in 2007.

Today, I hear something quite different! Her voice is a little sweetsy at times. But it’s also kinda bluesy, pop…more pop than Etheridge or the like tho. She actually reminds me a little of the Patty Griffin stuff I’ve heard. I actually made that note more than once.

Stand out songs for me are:

Flood has a little Muppet thing going on! I think it’s the horns. It’s a marchy fun tune.

Hate. It’s super gritty and cool. It shows her voice well too. This is my favorite track.

The title song, Cathartic is also suited for radio.

It’s a good album with some real gems.