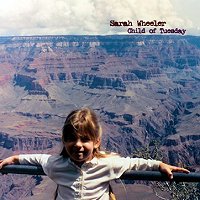 Sarah Wheeler is a new singer/songwriter of the next generation. She is only 18 years old, and single handedly produced her debut “Child Of Tuesday”. She plays the piano, guitar and she is learning the cello, although there is no trace of it on the album

First off, Sarah Wheeler has an amazing voice, and that is something that truly carries the record. Her voice has a desperate and melancholy tone to it and that makes her sound older than she really is. This melancholy tone truly suits an album so filled with desperation as the songs are generally gloomy and depressing, with the exception of “Blind To Me”. This is a sombre yet very powerful song: with minimalistic guitar work, she provides a song that acts like an anthem for honesty and bravery. Even though her lyrics aren’t the most poetically confessional, the desperation and power of her voice make it a very convincing song. A risqué tempo-change occurs halfway through the song, something that doesn’t do the mood of the song any good. Such things aren’t very uncommon on the album, as the music changes suddenly and rapidly in “Smell Of Summer”, too. A fine solo in the song makes it feel as though you’re listening to two songs mended together, but brings it to a fine and moody end.

Although there is not one specific influence that you can pinpoint on the record, there are a lot of different ones. Some of the songs have the powerful ‘in-your-face’ messages such as the old Alanis Morissette records have, and some have the ethereal musings of Tori Amos written all over them. Others, such as “Daughter Of A Ghost”, automatically remind you of Ani DiFranco’s spoken word.

Although influenced by, the songs never copy those artists. The songs lack the edge that Alanis can pinpoint, the message that Tori can so hauntingly deliver, and the clever wit of Ani’s poems is never truly reached. But that is not a major flaw, as she manages to combine these artists, mix them all up, and make a product that is not bad at all. Especially considering the music that is made by most of her peers, which is almost always an attempt to fit into a certain scene. This album is more a finished product on it’s own. Perhaps that is because it has so many facets, as the album comes with a recited poem, an acapella song, haunting piano ballads, folky guitar tunes and a lot of everything in between, or perhaps it is because of the sincerity of her lyrics, her music and her voice in all of the songs that caused my expectations to be greatly exceeded.

All in all, this is a very confident debut that shows a very versatile artist who is capable of going very far. With all it’s honesty, though, it is a clumsy album at times, and it shows that she is exploring rapidly through all sorts of influences. When she finds a place of her own, I think we can expect a lot of great music, and that is something worth waiting for.

In the mean time, this is a very intriguing, honest, and overall good CD that fans of diverse and heartfelt music should definitely try.