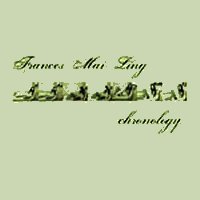 Frances Mai-Ling is one of the first artists I ever spotlighted on Collected Sounds six years ago when this site began. So we’ve kind of worked together lo these many years. But she’s been making music for even longer than I’ve known her.

She has said herself that singing is not her strong suit, that she considers herself a pianist first. But I will say that her voice has improved. It sounds very nice especially on Track 3 where there’s a nice soft touch to it. That’s really a very pretty song all around. The piano part is enchanting.

One thing that has not changed is that she remains a very good piano player. These songs are beautifully written, complex and interesting.

“The Girl” is one track that’s been on other releases in the past. It’s an upbeat interesting song. Interesting in that it’s got different movements…she could have taken this song and written at least two different ones, but she put them in one. I like it when that happens.

“Firecracker” has the most amazing intro. I just love it! In fact the entire piano part and melody are fantastic. I think this is my favorite vocal song on this record.

“Understatement” sounds to me like it belongs in a film. She makes great use of the minor notes and dissonant chords. This is my favorite instrumental piece here.

I think this is Frances Mai-Ling’s best release yet. I’m really enjoying it.

Track Listing
Listen to track samples
1. WALLS
2. Homage
3. Hold On
4. The Girl
5. Tears In My Palm
6. Firecracker
7. Not To Be This Way
8. Conversations By Myself #9
9. Understatement
10. The Commitment Song