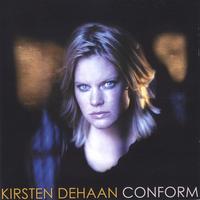 Kirsten DeHaan’s voice has been compared to Janis Joplin in more than one instance, but I’m afraid I don’t see it. To me, Joplin’s voice is grating (I know, hate me if you must) where Kirsten’s is much more pleasing. It has a much softer feel yet is still gutsy. Reminds me more of Tonya Donnelly.

The music itself is in the same vein as Donnelly and Belly, but also has a harder edge at times. After listening to “On Our Own” I found myself humming “Malibu” by Hole so something in my subconscious put those two together.

There is a very strong guitar presence here. In both the CD cover (a photo of a very pretty guitar on the inside flap) and the songs. The electric solo guitar is prominent is many songs. I’d go so far as to say maybe too prominent in some, even. But perhaps that’s just me. I like guitar, I just don’t want it to be obvious to me that I am supposed to be listening to the solo. I would rather hear the vocals. But again, it’s only my personal preference. Many love the noodling.

All in all this is a strong rock recording.