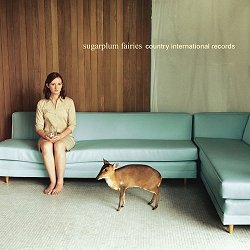 Sugarplum Fairies previous release, Introspective Raincoat Student Music was reviewed here by both Anna Maria Stjarnell and I back in 2003 and we both loved it. So to learn of a new release by them was quite exciting.

The “fragile vocals” Anna Maria spoke of are still there and still have an amazing effect.

“Velcro Girl” has a 60s psychedelic feel. It’s very swirly. I see lots of purples and spirals. For those of you who don’t “see” music, no, I’m not on anything. But sometimes I visualize when I listen, and that’s what I see. The melody is fantastic on this song too.

Actually the whole album, including the packaging has a 60s flair. The style of the artwork (the old furniture, record player, etc) is all nicely retro. The music is also, but somehow is still fresh. That’s quite a feat to pull of and Sugarplum Fairies do it with perfection.

I could just go into what each song sounds like or says to me, but that would be giving you too much. You’ve got to experience it yourself. I don’t even want to name stand out songs because later I’ll read this and say, ‘why didn’t I pick ____?’ because I really like them all.

There’s a lot going on in this record. Best heard loud or on headphones. But I still don’t “get” the album titles unless they just put a bunch of words into a hat and draw them out and put them together. It doesn’t matter, the music is great and that’s what counts.

Review by Anna Maria Stjärnell
I see Amy’s already written about this record, well here’s my take on it. The last album by Silvia Ryder and Ben Bohm was lovely. Their new one is just as great. There’s still a slight Velvet Underground as fronted by the divine Nico influence here. “Velcro Girl” is a fine example of this, breathy vocals set against a thumping beat. “First Love, Last Rites” is a delicate ballad that reminds me of Mazzy Star. “When you’re Mean” is catchy and charming despite lines like “When you’re mean I smile”. “You’re such a Weird Girl” is another great little song, with its mentions of Bettie Page and its late night vibe. The closing cover of U2’s “All I want is you” is just perfect too. This little gem is released in may so start saving up for it now.