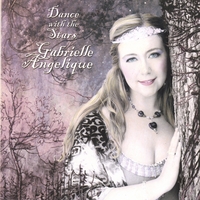 No, it’s not a cheesy TV show, you’re thinking of “DancING with the Stars”. I know my mother always told me not to judge a book by its cover, but you can with this album. The cover art depicts just what you will find on the inside.

The music is multilayered, soft, fairy-like and pretty. Gabrielle Angelique’s voice is lovely. It’s a little girly. I would compare her to maybe Kate Bush, especially on her cover of Bush’s song, “Wuthering Heights” which is beautiful.

The songs range from traditional Scottish fare to the Rolling Stones. Which sounds schizophrenic, but it’s not because it’s all done with Angelique’s ethereal style. Some of the songs are written by her too and those are very nice.

“Fairy Realm”, once of her compositions is bordering on dance music. Lots of electronic toys. Very fun.

This is a nice CD if the style appeals to you and it does to me.

Rating: 5 Stars
Comment: I love this album!!!My favorite songs are “Fairy Realm” and “A Mermaid She Was”.I found her on MySpace and have been hooked ever since.She is so unique and original.I also really like “Wild Horses” but it makes me want to cry.Her original songs are so beautiful and fun.I feel I can escape from reality when I put her music on.When I’m having a really bad day I listen to her music really loud on head phones and close my eyes.She is such an amazing musician.This is a great CD.
name: Josie Grey on Tuesday, September 19, 2006

Track Listing
Listen to track samples
1. Dance with the Stars
2. Wild Horses
3. Fairy Realm
4. Skye Boat Song
5. Wuthering Heights
6. A Mermaid She Was
7. He Moved Through the Fair
8. The Greatest Love
9. Anachie Gordon
10. May It Be