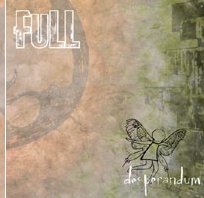 Back in 2003 I reviewed this band’s debut CD, DimStar. I loved that one, it was really something different from all the other records I’d been getting recently. I’m happy to see that the debut was not a fluke and that this is one band that can keep the good stuff coming.

On headphones (which is the only way to listen to this stuff) it sounds a little like there is more than one song going on at once. There’s the main atmospheric rock then there’s some tinkling bells (xylophone?) that don’t exactly match, but sound great anyway.

In fact, they do this frequently. There’s the “front” part of the song then the background is almost dissonant. No wait, it IS dissonant. It gives a slightly uncomfortable feeling to the listener, but it’s cool, nonetheless.

On some tracks, “Push it Down” for one, they sound a bit like Evanescence. Think Evanescence mixed with Hooverphonic. Quite nice stuff.

Note: On the previous review I had warned that when visiting the band’s site they have immediate-no-choice-in-the-matter music playing (a huge pet peeve of mine) and that whole site was in a pop-up. The pop up junk is gone, thank god. But it’s been replaced with a very Flash heavy site and still forces you to listen to the music immediately. Now I don’t mind Flash, but I do mind that music thing. But at least you can turn it off. Oh well, you can’t have everything, right? It looks pretty anyway.
**UPDATE August 13, 2008: I have removed the link to the website, becuase it’s gone completely.