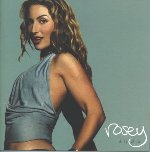 When I was first contacted about Rosey she was scheduled to appear on Jay Leno’s show later that evening. I stayed up and watched it. My first impression was, she’s pretty but isn’t doing anything that other artists are doing. I was thinking Shakira combined with Poe. Interesting slightly.

Then a few days later I got the CD. I popped it in and realized I must have been half asleep when I saw her on TV. The first song on the CD, “Love” is a really interesting song. It’s immediately catchy. In fact, I felt like I’d heard it before. Which made me think that perhaps it was the song she performed on Leno. But no, it wasn’t. That song was Track Two, “Afterlife” which is also a good song.

The rest of the CD is good as well. Though she covers topics such as abuse, and low self-esteem, her songs aren’t going to change the world. But I don’t think that’s her intention. This album is fun and I think that’s what it’s mean to be.

Rosey’s voice is very distinctive. You could compare her to Fiona Apple or Beth Orton among others. She sounds very bluesy, funky and jazzy with the right amount of pop thrown in. She can sound like Poe in one song (especially “Beautiful”) and Destiny’s Child in another, while even getting a little into the Macy Gray thing. She writes the music (words and music both in most cases) and sings. It doesn’t appear that she plays an instrument but several talented musicians back her up and make this album a rich full experience in pop music.