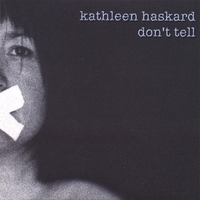 Of all the CDs I got the same day as this one, (which was about 10) this one seemed to stand out to me and I was really anxious to hear it. I am not sure why. I had never heard of Kathleen Haskard before but something about the art and the packaging was intriguing to me (not so much that she has tape on her mouth either, just the general overall quality).

It is interesting and unique. She has a deep, folksy voice. The music is hovering around folk but there’s an edge to it as well. It’s a little dark.

Don’t Tell is cool, it reminds me a little of Siouxie Sioux. It’s got a driving rhythm and the sort of wailing vocals. Cool.

Will Someone Explain is a downright country song (minus the twang). It’s a nice sort of a shuffle of a song, with a repetitive melody. It’s different but I like it.

Hallelujah is great. Don’t think it’s yet another cover of the Leonard Cohen tune, it’s not. It’s an original that actually has a sound reminiscent to Talking Heads’ Psycho Killer mixed with PJ Harvey.

There are a lot of different sounds represented here, yet the album never sounds schizophrenic. It’s a unique and interesting experience (in a good way!).