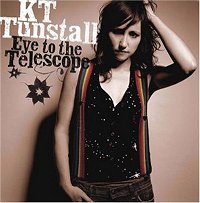 KT Tunstall became known to me quite suddenly though a strange series of events. I found her on MySpace and took a listen to her and liked it. I’d never heard of her before, and though, ‘oh new artist just starting out, blah blah blah’ I even sent her a message to see if she was interested in a house concert.

Then the next day or so, I saw her featured on VH1 (I was probably watching “Flavor of Love” don’t hate me). So then I felt really dumb for not knowing who she was. Maybe watching that show is wreaking havoc with my mental state. But I digress…

A few days later I got a request to review her CD and I jumped at the chance! So now I have it, and I can’t stop listening. I just love it.

Just when you think everything has been done before someone comes along with something truly new. Oh sure some of her songs might remind you of other artists, but for the most part, no one else that I’ve heard sings rock songs with this interesting blend of rhythms and melodies. It’s very hard to put into words.

But “Black Horse and the Cherry Tree” (which I call “whoo-hoo”) is amazing. I defy you to stand still while listening. It’s very difficult. There’s just a fabulous fierceness of which I just can’t get enough.

But KT can also take it down a notch or three as we see (hear) on “Silent Sea”. This song is beautiful. The tinkling piano intro and her sultry voice are such a nice combination. This track really shows her vocal skill, that she is not just a rock-singer who can belt out a tune loudly.

This is a great record. Go get it now. Seriously. Go. I’ll wait here.

Rating: 5 Stars
Comment: Of this generation of new songwriters I’ve been writting about, this girl is, after Damien Rice, the most talented one. The first time I saw KT Tunstall (Scottish with Chinese blood) was in MTV España and I was fascinated, because she was playing live Black horse and the cherry tree, and it was herself who played every part of the song… it’s hard to explain, so watch it by yourself. Without losing a second I looked up for the album, and at first I was i little bit disappointed, because the first single y great, and the rest of the album, despite being a good album, isn’t son good. Some listens later I corroborate that it’s a great album, and everytime I listen to it I like it more and more. KT is a young talented girl, and in this debut album you can see she has a good musical sense. The production is very good, it achieves a direct and fresh sound. Most of the songs are pop-rock with some R&B in her voice, but there are also some concenssions to calm songs (Heal over is great). You can listen some samples at the section “Album” of its web and you’ll see what I’m talking about. She is a great musical promise, and I hope that she has a long career. It’s a must for those who like Alanis Morissette, Damien Rice, Sheryl Crow, Michelle Branch, Aimee Mann… and these kind of artists that are not 100% alternative, but doesn’t stay in mainstrem (ones more than others LOL). The best: Suddenly I see, Miniature disasters, Stoppin’ the love, Heal over, Black horse and the cherry tree. Rating: 8/10 gatchan82
on Tuesday, April 18, 2006