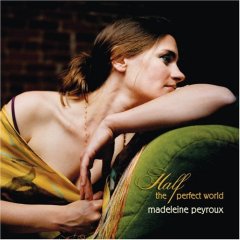 I first knew of Madeleine Peyroux when she opened for Sarah McLachlan many years ago. At that time she won my heart because she sang a Patsy Cline song (“Walkin’ After Midnight). But she seemed to drop off my radar. I later learned that there were times she’d sort of drop out all together, so I guess this is why. I can’t say I blame her, the industry is so messy sometimes.

Anyway, she’s back and this is a really nice record. It doesn’t really qualify for the site since most of the songs are written by someone else and the ones she is credited on also credit several other people. But I like it and I want to support her so here it is.

She really does have a beautiful voice that seems born for this type of music. It’s just so smooth and dreamy.

The songs selection is great in that they are all great songs that really showcase both her voice and the musicianship of everyone involved.

“The Summer Wind” makes me want to dance outside in the summertime barefoot.

Her duet with k.d. lang, is “River”, a Joni Mitchell song and it’s done beautifully. I’ve never heard it quite this jazzy. Their voices sound lovely together.

This is a very nice jazzy relaxing record.