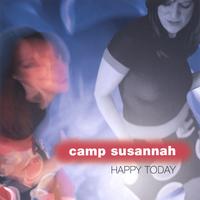 Susannah of Camp Susanna is Susanna Blinkoff. She co-wrote most of the music and wrote the lyrics for this, their debut album. Blinkoff is a busy lady; she’s a screenwriter, actor, and composer who began singing professionally when she was in the eighth grade.

The style is somewhere between pop and ambient jazz. The songs are well, written and professionally performed. Blinkoff’s voice is a perfect match for the songs. The production is first class as well. The recording has a nice rich sound.

Some of the songs tend to head more in the mainstream pop direction, but they’re still better than 90% of the pop that’s on the radio now. It never becomes trite. Hooky? Yes. Boring? Never.