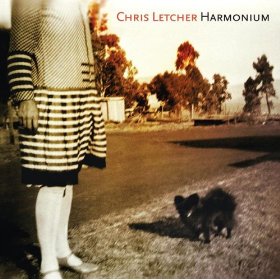 Chris Letcher ‘s website says he is a South African singer-songwriter and film composer based in London.

I liked this record from the get-go (do people even say that anymore?) but with each listen, it grows on me even more.

The opening track, Harmonium is really cool…especially on headphones. There are lots of little tickyticky sounds going on and his echoey haunting vocals mixed in is divine.

I like Parker too. It’s sort of a Beatles sounding deal.

He mixes a variety of sounds and melodies making cool songs that are fun pop with an edge of psychedelia and whimsy.

I’ve had this one on my ‘plate’, so to speak, for a long time now and I don’t know why it’s taken me so long to actually put my feelings into words because I really do like it. So to Mr Letcher, I apologize for taking so damn long to review it. Some things are harder to write about, even when really good!