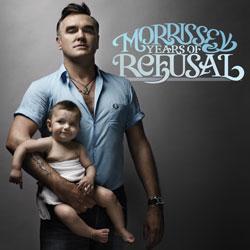 From his MySpace page:

’Years of Refusal’ – The New Album From Morrissey

Morrissey’s new studio album ‘Years of Refusal’ will be released on 16th February 2009 on Decca/Polydor, preceded by the single ‘I’m Throwing My Arms Around Paris’ one week prior.

The single will be supported by two new songs ‘Because Of My Poor Education’ and ‘Shame Is The Name’, the latter featuring additional vocals by Chrissie Hynde.