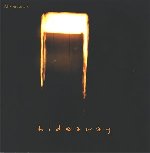 Alison Lewis is a member of a band called Twilight Babies but is also a solo artist in her own right. “Hideaway” is her solo release.

This recording opens with squeaky guitar and then we hear Alison’s pleading voice. This CD goes from funky folk to dream pop.

The next song, “He Broke Down” is very reminiscent of Ani DiFranco. It’s got a driving drum line, an almost rap cadence to the vocals and strong guitar. Very cool song.

“Peter Pan” makes use of the distorted vocals, which is cool if not overdone (which it isn’t here). Her voice is very nice and doesn’t need to be distorted but it sounds cool nonetheless.

If you think Ani DiFranco with a trip hop feel sounds good, you’ll probably dig Alison Lewis. If this interest you also check out Alison’s other project, Twilight Babies.