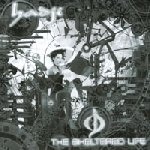 Hadji is a trio fronted by Wesley De Vore. Their industrial sound owes a little to Nine Inch Nails, so it’s hardly surprising De Vore has worked with them.

Vocally she’s as likely to croon sweetly as she is unleash a fierce growl.

“Build Me a Man” is a slowly building, lushly orchestrated ode to lost love.

“Among Ghosts” has a dense, electronic sound and a vocal ferocity to rival Courtney Love.

The eastern flavoured “Inside” is sensuous and driving. De Vore sounds like a woman possessed by demons.

Hadji are an unusual band and their sound should win them many fans.

Rating: 4 Stars
Comment: i happen to know wesley and i have to tell you, i am impressed with the amonut and talent dedication this woman has.. not only has she started and recored these by her self.. but the amount of knowledge she has is amazing .. i have never met a person as cool as she is .. i’d buy it again and i own 3 copies my self … wes is a extremly talented and i love her album… wes love you … jason
name: jason on Wednesday, July 27, 2005

Rating: 1 Star
Comment: This CD is just terrible. It’s very weakly draws upon various bands to mimic different styles as the CD drones on into a bismal repetitive eternity. Some reviews mention De Vore as having worked with Trent Resnor. Give me a break! From someone who has lived in New Orleans having come into contract with Trent is not rare & certainly not worthy of mention. Don’t waste your money as I did.
jost