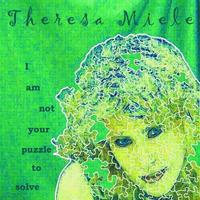 Album Name: I am Not Your Puzzle
Artist: Theresa Miele
Year/Label: 2005 / Independent

The first few notes of “Less Than” are played on some kind of synthesizer so it sounds like some funky 1986 tune. There’s definitely a new wave-ish sound to this. Very 80s pop. I picture Ducky dancing to the first song.

“Too Emotional” is a straight up folk song with guitar and solid lyrics. Very nicely written. I like this one a lot.

On “These Walls” she goes back to the folky guitar style. I like this much better than the 80s dance stuff.

Title track, “I am Not Your Puzzle to Solve” has an almost flamenco sound to it. Very nice.

She does a cover of Robert Palmer’s “Addicted to Love”. Before it came on I was thinking that many her songs leading up to it sounded like that one and so I was not surprised to hear that she covered it.

I am confused as to why she would blend two such disparate styles on one CD. It seems like most people will like every other song, but not every single one. I like her folky pop style, not so much her faster songs. Just a personal preference, I’m sure there will be others who will have a fondness for the other songs. I’m not saying she doesn’t do both styles well, I just prefer one over the other (and I AM a child of the 80s, in case you think I’m a teeny bopper).

If you like both of these styles, give this CD a chance.

Track Listing
1. Less Than
2. Too Emotional
3. Metrosexual
4. These Walls
5. Moody Moody Guitar Boy
6. I am Not Your Puzzle to Solve
7. Everyone’s a Loser
8. Darkly Slanted
9. You’ll Never Know
10. Addicted to Love
11. Nothin’ to Believe In