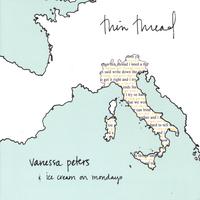 In September of 2003 I reviewed Vanessa Peters’ debut album, “Sparkler”.

I thought it was a very nice first release. I see that Peters has branched out a bit for her second CD. The sound is similar, still nice soothing folky pop, but the melodies are a little more intricate and the lyrics a little more thoughtful. That is not to say that her previous release was not well written, it was, in fact she even has a couple of the same songs on this one, I just think this release sounds a little more mature. “Sparkler” also had a hint of Americana that I don’t hear so much on “Thin Thread”.

The general sound is somewhere in the (early) 10,000 Maniacs neighborhood but with perhaps a Dar Williams next door.

The production is also very skillfully done. She is able to blend the backing vocals and the instrumentation with her voice quite nicely.

Vanessa is also joined on this release by her new Italian band, Ice Cream on Mondays. She spends part of her time Austin, Texas, and part in a gorgeous looking little village in Italy called Castiglion Fiorentino, where she met her new band. I think I want her life. The photos of the town on her site look enchanting.

Her melding together of the places and people is shown in the cover art, which is a map that shows Italy on the front, and the US (with Texas highlighted) on the back. In the liner notes she writes, “Maybe the thin thread would matter less if it stretched across a city or a state versus an ocean…”

Stand out songs: “The Maybe Love Song”, “Gone” and “Hooked” are my favorites.

← Album Review: I am Not Your Puzzle to Solve by Theresa Miele
Album Review: Beggar’s Alchemy by Morgan Grace →