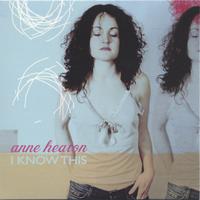 I’m a big fan of Anne Heaton and Frank Marotta Jr.s music. I hosted them here at my house last year and they’re just great live as well as on record. So it was nice to hear this (party) live recording.

This EP is made up of three songs that are studio recorded and three live ones (one even recorded here in Minneapolis, but not at my house).

I’m happy that she included the song, “Your Heart” as I think it’s my favorite song of theirs. It’s just so beautiful and almost haunting to me.

“You Can’t Take Him Away” is one that’s not on any other recording. She calls it her first political song. It’s about how the religious right has sort of taken over religion and how if you don’t agree with them, you are made to feel left out. It’s a good song. Interesting.

These are all great recordings. Even if you have most of these songs on another record, it’s nice to have these versions here in one place. If you’re a fan of Anne’s I think this is a must have especially because of the one that’s not found anywhere else.