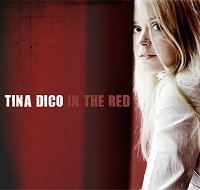 I had heard of Tina Dico some time ago because she was being talked about on the Collected Sounds forums. So I was happy to get the CD in the mail.

This is a very solid pop record. Tina Dico one of those, ‘why aren’t they famous?’ artists.

She is from Denmark (my second favorite place on Earth)

The songs are mainstream pop while still being interesting. They’re very well written.

Think Sarah McLachlan with a jazzy touch. The vocals are beautiful and the production only enhances the natural beauty of the songs and voice. There’s a great rich full sound.

On “Losing” her voice reminds me a little of Sheila Nicholls.

I now have two favorite artists in Denmark, Tin Dico and Marie Frank. Maybe it’s time for a vacation there.

Stand out songs: “Nobody’s Man”, “Give In” (radio hit if ever I heard one). Actually, I’m going to stop here because I’ll just end up naming them all.