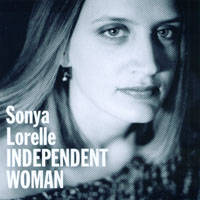 Sonya Lorelle has a cool jazzy, bluesy voice and plays a spunky piano. Think Norah Jones with a jolt of caffeine (I love Norah, but she can be a bit sleepy at times, not so for Lorelle).

Sonya’s voice is crystal clear and almost achingly emotional. Her piano playing is very nice. When listening to Lorelle, I imagine I’m in a small intimate club and there are only a handful of listeners who are all a little wine buzzed, paired off and are listening, but are also whispering quietly to each other and nuzzling together. This is pretty romantic stuff.

If you’re snuggling to this CD though, I would suggest fast forwarding over “I Deserve Better” which is a fantastic song, but you don’t want either you or your snugglee to relate to it.

She gets real jazzy and throaty on “There’s Something” which really shows her jazzy style.

Other stand out songs: “Love Like Crazy”, “Don’t You Know”

Rating: 5 Stars
Comment: This jazzy music stays with you and becomes a part of you. I have woke up many mornings and a tune of Sonya Lorelle’s will automatically pop in my head and set the mood for the day. True talent.
name: Jean on Thursday, May 5, 2005

Rating: 5 Stars
Comment: Cant listen to it often enough! A friend of mine said that Sonya’s cd is almost all he listened to for the first two months after buying it. I can’t wait for the next one to come out.
name: Nancy on Friday, April 15, 2005

← Album Review: Shoes off and Run (SOAR) by Cheryl B. Engelhardt
Album Review: From the Lion’s Mouth by Nedelle →