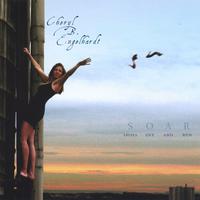 Cheryl B. Engelhardt has put out a really fun pop recording. There’s nothing terribly unpredictable about this stuff. It goes pretty much where you expect it to. What’s unexpected is that it was released last year. It just has a older pop feel to it. These songs have a kind of show tune-y sound… theatrical. It reminds me of Helen Slater’s CD which I reviewed in 2004.

Warning is a stand out for me probably because I saw the video first. The CD is enhanced and this means that when you pop it in, you see the video for this songs. It is a tad on the cheesy side, like your average 80s video by John Wait or some such, but it is catchy and the song is too. I don’t mean that to be an insult. I grew up on that stuff and still love it. I found the song was swimming around in my head for a good day and a half (and I liked that).

Track three, Proof, is worth the whole CD. Gorgeous piano stuff. This song does not sound dated to me. She displays a nice use of minor keys. Has some very intricate and fast-fingered stuff. I’m mucho impressed. She doesn’t just go up and down the scales like some pianists do.

I surprise myself a little by saying this because I didn’t expect to, but I really like this recording. It’s almost like a guilty pleasure. Not that it’s bad or wrong to like it. It’s just that it seems so unlike the stuff I usually listen to and admire. In the same way I’m a little hesitant to admit that Barry Manilow is my musical god. It seems a little too pat, fluffy, whatever. Either way, I don’t care because it’s comforting and makes me smile. And that’s what music should do. I mean, it’s cool if it moves you in other ways too, but smiling is a nice result don’t you think?

I put this on shuffle with the other CDs I was reviewing at the time and each time a song came on and I thought, “ooh I like this, who is it?” is was Cheryl B Engelhardt. So even if you think this may not be your bag, give it a shot. You might be pleasantly surprised.