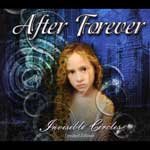 After Forever is one of the more prominent bands in the gothic-metal genre in Holland. However, they are largely unknown outside of Europe. Perhaps a new album could change that.

One of the most noticeable changes in After Forever the past year has been the decision of guitarist/songwriter Mark Jansen to form his own band “Epica”. His departure from the band has had its consequences on the sound of the band, because this album quickly shows itself to be the heaviest the band has made to date. The previous albums “Decipher” and “Prison of Desire” were melodic, dark, bombastic gothic-metal albums, with a prominent role for lead vocalist Floor Jansen, who is blessed with a very powerful voice. This album, however, has more room for the heavy grunts of Sander Moos

The album itself is a concept-album, the first by this band, about a quite modern theme: Two young, hard-working people barely have time for each other, and decide to have a child so that they can grow closer together. Of course, this turns out to be a wrong decision as the relationship only grows worse, and the child is neglected. Because of this, the child turns out to be just like its mother, thus completing the ‘invisible circle’.

One of the first things that amused me about the album was the horrible voice-acting. There are several spoken parts on the album, to clarify where in the story the listener is, and what is going on (Floor’s high-pitched vocals can make it very tricky to define the lyrics). However, they are done very poorly, and it makes me wonder if the actors were being sincere when they spoke their parts, or if they were being sarcastic. It doesn’t do any good for the atmosphere of the album, though about halfway through the CD that doesn’t matter anymore. Songs like “Digital Deceit” and “Through Square Eyes” show After Forever at its best. The songs are very well produced, the production is very clean, and the band performs and sounds like a team. Shortly after that, though, comes “Two Sides”, a song that really blew me away. With this, it becomes very clear that After Forever is no longer just a gothic-metal band, but has taken on full front metal. The CD closes with “Life’s Vortex”, another heavy song that unfolds the painful conclusion of the album.

With their new heavy sound, After Forever seems to have found a style that they can master. Although, in the wake of sudden popularity of gothic-metal bands everywhere, this album has practically no commercial chances, it is still one of their most complete works to date.

Rating: 5 Stars
Comment: its perhaps the best cd of AF, so much better than the new album remagine… the best songs are beautiful emptiness, between love and fire, sins of idealism and victim of chioces… a must-have
name: Florian on Sunday, December 25, 2005

Rating: 5 Stars
Comment: This is a great cd.. Now I can’t spend a day without listening to at least one song from this cd… about the lyrics, WOW!!!!! they are just amazing.. it’s a great history behind the songs that you’ll only understand if you read the lyrics listening to the songs… well.. I guess that’s all that I can say about it 😛
name: Pedro on Thursday, September 1, 2005

Rating: 5 Stars
Comment: oh please i want to know where i find the invisible circle lyrics!!! if somebody can help me, tell me please!!! send me a link in a email. I am a big after forever fan and im not like others brazilians fans that just hear the sound and melodies, i love the Floor lyrics (i translate by my self) and it gives me inspiration e touch me deep. ps. sorry for my english, i know that is horrible. Tanks so much, im wating anwers.
name: Bsv_gy on Tuesday, October 19, 2004