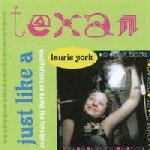 This is Laurie York’s second CD. Her first, “Messy” is a collection of poems and instrumental piano pieces (see link on the right for a review of that one).

This recording is a departure for Laurie. She wrote and recorded this one while living in a small town in Korea. She didn’t have a piano at her disposal so she played guitar instead. Also this CD is consists a few poems, but it mostly full songs. I have to say that I greatly admire anyone who can pick up and move to Korea for a year and also one who can just pick up another instrument when her first choice in not available. This woman is amazing.

That said, so is this CD. I can’t escape the Ani DiFranco vibe I get from this (a good thing indeed). She writes passionate folk songs and has a voice that is perfect for this genre….and she can play guitar…quite well!

Laurie continues her material with her fabulous way with words. She beings this CD with this:

I always sound just like a Texan, no matter how I try to wash that white trash off of me.

You gotta love that (by the way, she doesn’t sound white trash at all to me).

She explores what it is like to live in a place where she is a foreigner, something many Americans never experience. She also explores relationships with insight:

I would rather go hungry than eat anymore of the lies you been feeding me.
And I wouldn’t mind the voice of my guitar.
It’s better than your voice ringing in my ears.
Or worse, someone new whose voice is a near but not quite match.

If you like honest well-written lyrics and soothing guitar (she does manage to sneak some piano in here, not sure how) this is a CD for you.

2 comments for “Album Review: Just Like a Texan by Laurie York”