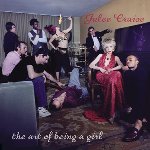 It’s been a while since Julee Cruise became known as the vocalist in David Lynch’s truly odd TV series “Twin Peaks”. Her last record came out in 1993.

This is a comeback even if Cruise has been busy since her last album, appearing on records by Khan and touring with the B52″s. The nightmarish yet dreamy sound of her Lynch and Angelo Badalementi collaborations is gone, replaced by a more loungey approach and a less waifish vocal delivery.

“Falling in Love” is driven by techno-ish beats and the repeated line “Falling in love for me is a form of insanity”. It’s a deftly produced song.

The title track is a very cinematic song, evoking images from the film noir genre with its shuffling beats and chilled out vocal cooing by Cruise.

The soft bossa “Everybody Knows” is a perfect setting for Cruise’s gorgeous voice.

“Cha Cha in the Dark” is quietly eerie and sweet all at once.

“Floating into the night” was a classic and Cruise has a tough job trying to follow it.

She has succeeded by daring to try a different style. “The Art of Being a Girl” is a stellar effort.