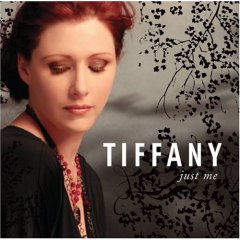 I admit, I was not a huge fan of Tiffany back in the day; I was a little old for her music (just a little, people!). I was into The Cure and The Smiths and so on at that time. Plus I was, even back then, someone who always appreciated an artist more if she wrote her own stuff and as far as I knew, Tiffany did not. But she does now.

Since I did not keep up with her career I did not know that she had become a dance diva as in electronica/dance I mean, not just pop. But I am happy to say this record isn’t like either of those genres. Well, ok maybe it’s still considered pop, but it’s much more grown up now (which stands to reason). There’s definitely a good beat to the songs but it’s not done in a cheesy way at all.

Her voice is as good as ever, hell probably better.

“Anyone But Me” sound a little more alternative, I’m not sure why, perhaps the minor notes? But I like it.

You know I’ll like ” Streets Of Gold” as it’s a piano song. It’s lovely. Sadly, she didn’t write it. But that’s OK. It’s not the message or lyrics that I am attracted to, it’s the piano, voice and melody.

As you can see, I like the middle of the record the best.

“Winter’s Over” is another piano driven track. This one she did co-write. I honestly think her voice sounds better with piano than with guitars or flashy dancy stuff. But that might be my preference for the instrument.

It’s still not really my favorite genre of music it’s a little too mainstream for me. But she’s good and if you like adult mainstream contemporary music you’ll probably dig it. If you’re already a Tiffany fan you’ll already have it so you don’t need me to tell you to buy it.

Note: I admit I watched and rooted for her on “Celebrity Fit Club” she was great and seemed like a genuinely nice person…and she’s much hotter now than she was back in the 80s.