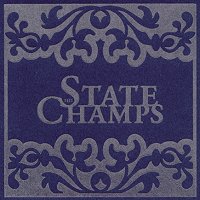 In doing reviews I always do a little research while writing, and when I visited their website I saw it says,
” The State Champs have disbanded.
The CD is still available
Amy plans to continue doing solo shows”

This is a bummer. I got this record at the end of May and now the band is already defunct.

It’s possible that the band broke up long ago and it was sent to me so I could be familiar with lead singer, Amy Abt’s music. She is after all the singer, guitarist and songwriter.

I like her sound. The CD did not come with lyrics and I’m not going to sit here and decipher them all but what I can hear off the bat, they sound intelligent and well thought out.

Her vocal style sounds band oriented to me. I don’t know how she’d sound as a solo artist. Some voices just sound better when they’ve got something backing them up and I think this is one of them. She sounds great with the band, but her voice is a little wobbly at times so I think it benefits from some back up. I also like the male voice singing with her as on Misfortune.

Some songs really stand out: Big Whatever is one of them. It’s got great movements and makes good use of the crescendo and decrescendo. I always love that.

I also like For the Captain. It’s got a fun party rock sound.

I guess I should reserve judgment until I hear some solo work, but I really like the band as a whole (and no, I don’t know anyone of the band members so I’m not sticking up for them, I have no idea why they disbanded).

I do like this record. It grows on my more with each listen and I can see listening to it long after this review is done. They’re a fun band.

I’ll be on the lookout for Amy Abt’s solo work. I hope it sounds as full as this does.